The Los Angeles Lakers have reloaded for the 2021-22 NBA season (league’s 75th anniversary) after failing to repeat as champions due to injuries and questionable chemistry. Armed with LeBron James, Anthony Davis, Russell Westbrook, and a completely new supporting cast, they have a championship-or-bust mentality.

* – Signed to a two-way contract with the South Bay Lakers

Talent, chemistry, continuity, and health are 4 of the biggest factors in winning a championship and the Lakers certainly have the first two. With a Big 3 and a supporting cast willing to make the necessary sacrifices to win, the real concerns heading into the season are health and if they have enough time to put it together.

At 31.3 years old, the Lakers are the oldest team in a league where the average age is 26.4, according to RealGM. The front office, coaching staff, and players view this statistic as experience while others view it as old and injury-prone. While most of the players should be praised for their longevity, Father Time unfortunately can strike at any time. For the Lakers, load management will be key in winning it all.

The Westbrook trade suggested a majority of Davis minutes at center to improve the team’s floor spacing, but those hopes and dreams were thwarted with the Howard and Jordan signings. After playing 96% of his minutes at center in his final season with the New Orleans Pelicans, Davis has only played 40 and 10 of them in his first two seasons with the Lakers, according to Basketball Reference. Based on Davis’ preference to mostly play power forward during the regular season and some early injuries, the ideal rotation features him finishing games at center.

If/when healthy, Ariza will likely take Bradley’s minutes and Horton-Tucker will likely play major minutes to give his older teammates some rest throughout 82 games.

The Lakers have 14 new players (11 if excluding Bradley, Howard, and Rondo who won a championship with head coach Frank Vogel), but load management and injuries made it difficult to establish a rotation during the 2021 NBA preseason.

While the Lakers had some moments in preseason, they will likely get off to a slow start, which will create drama among fans and the media. However, the team that plays well together and stays relatively healthy from April to June usually wins — and the Lakers hope they give themselves that opportunity to win No. 18. 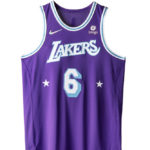 Back to Top
Close
We use cookies on our website to give you the most relevant experience by remembering your preferences and repeat visits. By clicking “Accept All”, you consent to the use of ALL the cookies. However, you may visit "Cookie Settings" to provide a controlled consent.
Cookie SettingsAccept All
Manage consent

This website uses cookies to improve your experience while you navigate through the website. Out of these, the cookies that are categorized as necessary are stored on your browser as they are essential for the working of basic functionalities of the website. We also use third-party cookies that help us analyze and understand how you use this website. These cookies will be stored in your browser only with your consent. You also have the option to opt-out of these cookies. But opting out of some of these cookies may affect your browsing experience.
Necessary Always Enabled
Necessary cookies are absolutely essential for the website to function properly. These cookies ensure basic functionalities and security features of the website, anonymously.
SAVE & ACCEPT